A seminar was held today and the day saw Kwesi Pratt and Raymond Atuguba deliver brilliant speeches to the crowd in person and those watching. According to Kwesi Pratt he feels appalled that some elements in government want to twist Ghana’s history. He questioned why a country like Ghana should be confused as to where to place the apostrophe when it comes to spelling Founders.

According to Kwesi Pratt, there is currently an ongoing fight between the Nkrumaists and their opponents. Though Kwesi refused to directly mention names he noted that many are in this government and they want to elevate Busia, Danquah and Akuffo-Addo as the founders of Ghana. In plain words, Kwesi said he and his Socialist Movement will not relent in putting out clearly the history of Ghana. He boldly stated that they will fight and fight till the suppressers leave office. 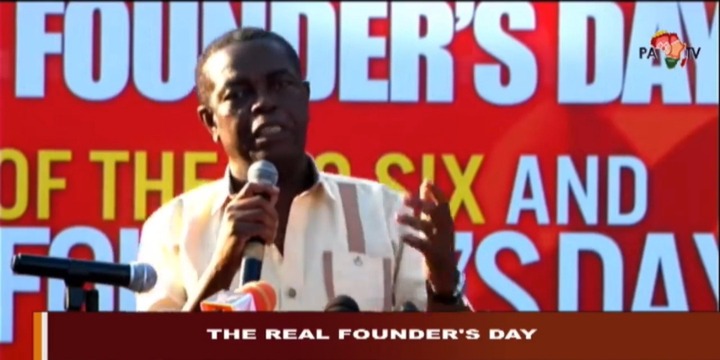 “We will win that fight and we will not stop until we have won. The distortion is huge. We didn’t change the position of the apostrophe. They did. Why do we have a Danquah Circle when it wasn’t only Danquah who got independence for Ghana? Can’t we then also have a day in honor of Nkrumah?” Mr Pratt questioned.

Kwesi Pratt called on those fighting the legacy of Nkrumah to stop because very soon they will be exposed. He challenged Ghanaians to do their own research so as to prevent the Busia Danquah’s from distorting Ghana’s history.

It is interesting how each year Ghanaians are torn as to whether to celebrate Founders’ day or Founder’s Day. The opposition NDC claim that when they come to power they will abolish the August 4 Founders’ Day and reinstate Republic Day.