After Yesterday’s heavy downpour at Agona-Bepoase and its neighbouring towns, a building located at Bepoase has collapsed on a woman, her 4 children and two grandchildren around 11 PM yesternight. Unfortunately, a 12 years old girl called Alice Osei among them who is in class 6 died on the spot, her elder brother was also severely injured, they were all rushed to the hospital but one of them too died just this afternoon. 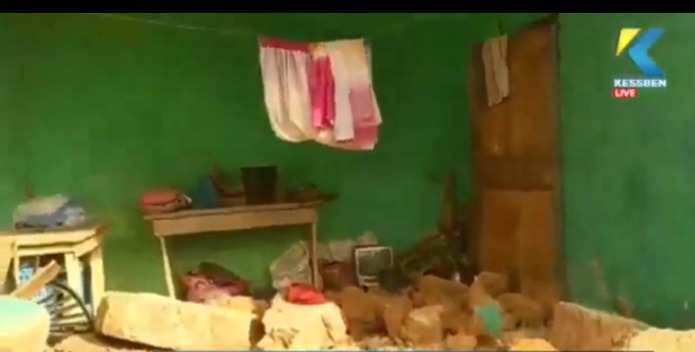 According to Kessben Tv reporter Brobbey Addai, the residents said they heard a noise during the night and they all rushed to the scene to find the building collapsed on the family of seven. Mr Brobbey said one of the woman’s children is pregnant, and she was so lucky that she didn’t sustain serious injuries, the building fell on her legs and her mother is too said she is experiencing pains in her waist and neck.

According to the NADMO Officer Mr George, most of the building in the Bepoase town is too old and is not in good condition. He said all those buildings needs renovations and has advised those living in such buildings to take the necessary steps to make sure they renovate their buildings to avoid any kind of disaster.