It’s body is made entirely of gold with eight diamonds precisely placed around the edges on the back.

The List of 9 Most Expensive Phone in the world

Instant communication between two people has been possible only because of the advent of a mobile device. Earlier, when we did not have any other option besides landline phones, it was very difficult to remain in constant touch with others even if it was an emergency.

The mobile phones have proved a blessing in disguise in this respect because it has blurred the lines that created distance between human beings by opening the communication channels 24*7.

The mobile phone is the most useful gadget in the present scenario because we cannot live without it even for a second. It has become as useful to us as water is for our living. This small device has a great impact on everyday life in both a professional and personal front.

We are dependent on it for every small as well as big thing. The best part about a mobile phone is that it is available in every range and more than 90% of the population can easily afford it.

From cheap to reasonable to expensive to some very high-end devices, you can buy anyone that meets your needs and of course pockets.

Most of the mobile phones are expensive because of specifications, but some very high-end products are high-priced because of additions like gold, silver, platinum, and diamonds in their body.

Are you interested in the most expensive phones in the world and if yes then go through the post below to know about some of them. 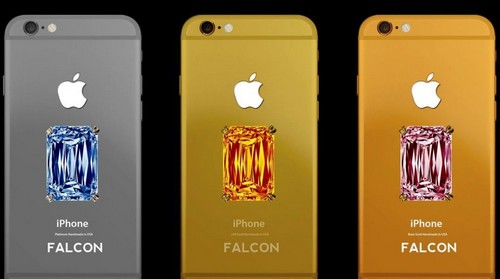 Falcon Supernova iPhone 6 Pink Diamond is a customized version that was introduced in the year 2014. It is a variant of Apple iPhone 6 and at a price tag of 48.5 million US dollars is the most expensive phones in the world. Nita Ambani, the owner of an Indian cricket team of IPL and wife of the richest man in Asia, is the owner of one such phone.

The most expensive phones Falcon Supernova iPhone 6 Pink Diamond has a pink diamond on the rear end, which is the main reason for its name as well as the price tag.

There is a platinum coating and hack protection features to make the mobile safe from unwanted interference. The casing is made from 18-karat gold to give it an attractive appearance. 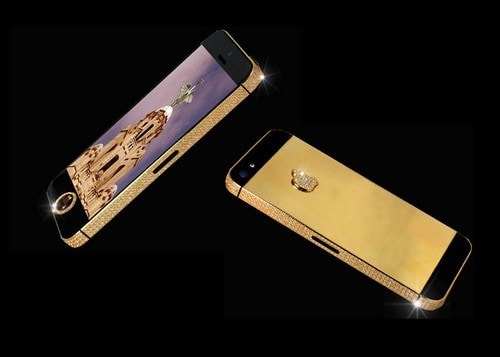 Black Diamond iPhone 5 is another product from Apple and has been designed by Stuart Hughes. At 15.3 million US dollars, it is one of the most expensive phones in the world. This is an awesome handset that has been handcrafted, and it took nine weeks of hard labor and intricate work to complete it fully.

The device is made of one hundred and thirty-five gram of 24 karats solid gold and the apple logo of this expensive masterpiece is studded with fifty-three flawless diamonds. Its screen is made with sapphire glass, and the chassis was integrated with six hundred white diamonds.

A deep-cut single black diamond of 26 carats has been used in place of the home button. It belonged to a businessman of Chinese origin who had commissioned the iPhone. 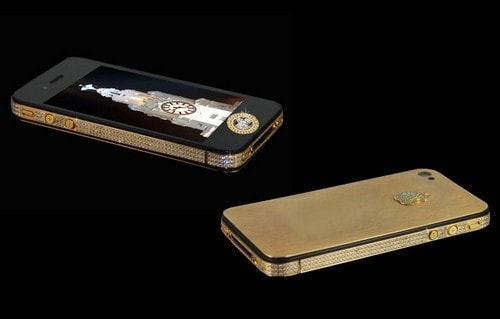 At a price tag of 9.4 US million dollars, Stuart Hughes iPhone 4S Elite Gold is no doubt one of the most expensive phones in the world. As the name suggests the credit for the design of this amazing device goes to Stuart Hughes.

Stuart Hughes iPhone 4S Elite Gold is an iPhone 4S, and this handmade device is studded with five hundred stunning diamonds of an estimated one hundred carats.

The logo, as well as rear panel, is made from 24-karat gold and only the logo has integrated fifty-three diamonds making it one of the most expensive phones in the world.

The best feature of the iPhone is the home button, which is a diamond of 8.6 carats, and in case you misplace it any day the brand offers an alternative diamond of 7.4 carats with the phone.

The mobile no doubt is exclusive, but the chest that holds it is even more so. It is made from platinum with polished pieces of original T-Rex dinosaur bone as well as rare and precious stones like Star Sunstone, Rutile Quartz, Charoite, Pietersite, and Opal. 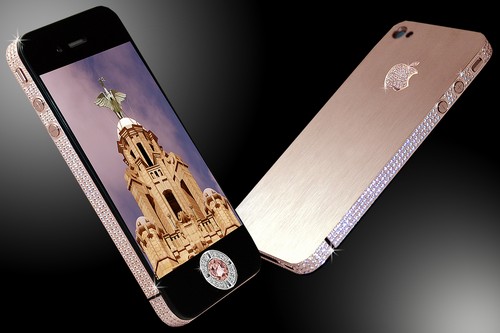 As the name suggests, Stuart Hughes iPhone 4 Diamond Rose Edition is designed by the famous designer Stuart Hughes. At a price value of 8 million US dollars, it is one of the most expensive phones in the world. It is part of a limited edition series as only two phones have been made and these are customized to suit the specific needs of its buyer.

Stuart Hughes iPhone 4 Diamond Rose Edition is an iPhone of internal storage space of 32 GB and is made from solid rose gold and five hundred diamonds of 100 carats.

The rear end is made from rose gold and the navigation from platinum. The start button is not any ordinary button instead is a single-cut pink diamond of 7.4 carats.

The Apple logo in itself is very amazing and is decorated with the help of fifty-three beautiful diamonds. The chest that holds the device is also not an ordinary one. It weighs 7 kg and is made of a single block of granite. 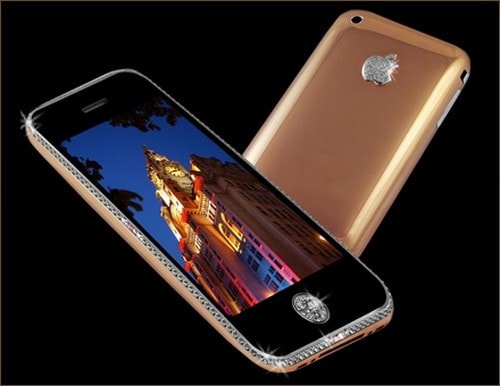 At 3.2 million US dollars Goldstriker iPhone 3GS Supreme is not an ordinary device but one of the most important phones in the world. It is an iPhone designed by none other than the famous designer Stuart Hughes and is a variant of Apple iPhone. Its internal storage space is of 32GB

Goldstriker iPhone 3GS Supreme is made 22-carat gold weighing two hundred and seventy-one grams. The rear Apple logo is studded with fifty-three diamonds and the front bezel with one hundred and thirty-six diamonds. Instead of the home button, you will find a single-cut diamond of 7.1 carats.

The chest that holds the phone is made from a single block of granite, top-grain leather and Kashmir gold. 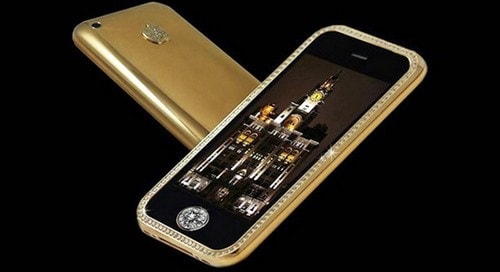 iPhone 3G Kings Button is an amazing device that has been designed by Austrian origin designer Peter Alisson. With a price tag of 2.5 million US dollars, it has successfully entered the list of most expensive phones in the world.

iPhone 3G Kings Button is one of the luxury pieces ever made with the help of 18-karat gold that includes rose gold, white gold, and yellow gold. The white gold strip of the iPhone is studded with one hundred and thirty-eight beautifully cut diamonds.

The home button has been replaced by a single-cut diamond of 6.6 carats. It is one of the most beautiful phones and a favorite amongst phone lovers. 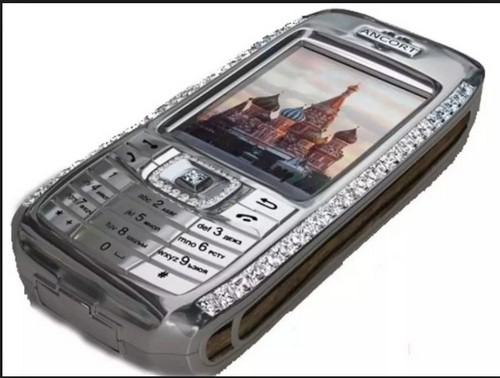 Diamond Crypto Smartphone at a price tag of 1.3 million US dollars is one of the most expensive phones in the world. The credit for its designing goes to Peter Alisson and creation to JSC Ancort.

The phone has been specially developed with the help of encryption technology to protect sensitive information. The operating system used by the device is Windows CE.

The most expensive phone Diamond Crypto Smartphone is a luxury device made of solid platinum, and its beautiful Ancort logo is made with the help of rose gold. Fifty diamonds, including ten rare and valuable blue-colored diamonds, are studded in the phone.

The navigation key is made from rose gold and has twenty-eight round-cut diamonds. The makers have used hand-polished Macassar ebony wooden on either side of the phone to give it a unique appearance. 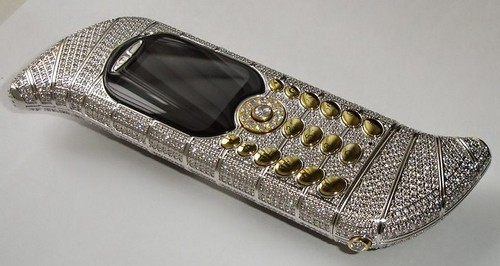 At its launch in Switzerland, the Goldvish Le Million found a place in the Guinness Book of World Records as the most exclusive and most expensive phone in the world at that time.

It is a luxury product from the renowned brand Goldvish, and it is the additions on the device that has helped to gain entry into the list of expensive phones.

The credit for the designing of this handcrafted phone goes to Emmanuel Gueit, jewelry, and watch designer.

Goldvish Le Million at a price tag of 1 million US dollars is one of the most expensive phones in the world. It is made with 18-karat white gold with VVS-1 graded diamonds of 120 carats studded in it and leather.

The display case is created with the help of sapphire glass. The device is a part of limited edition series as only three phones were released by the manufacturers. 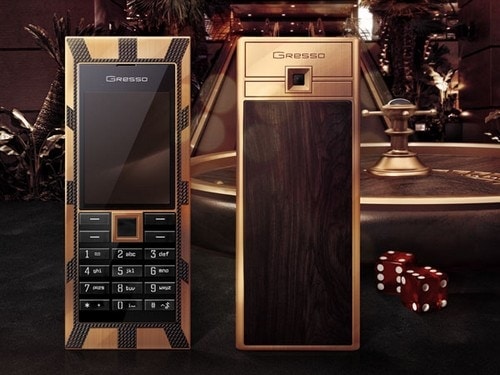 If Your Phone Mistakenly Falls Inside Water, Don’t Panic, Here Is What To Do (Very Effective)

Some Features On Xender You Probably Don’t Know (photos)

WhatsApp to stop working on millions of phones from January 2021

Google services in multiple countries go down in apparent outage