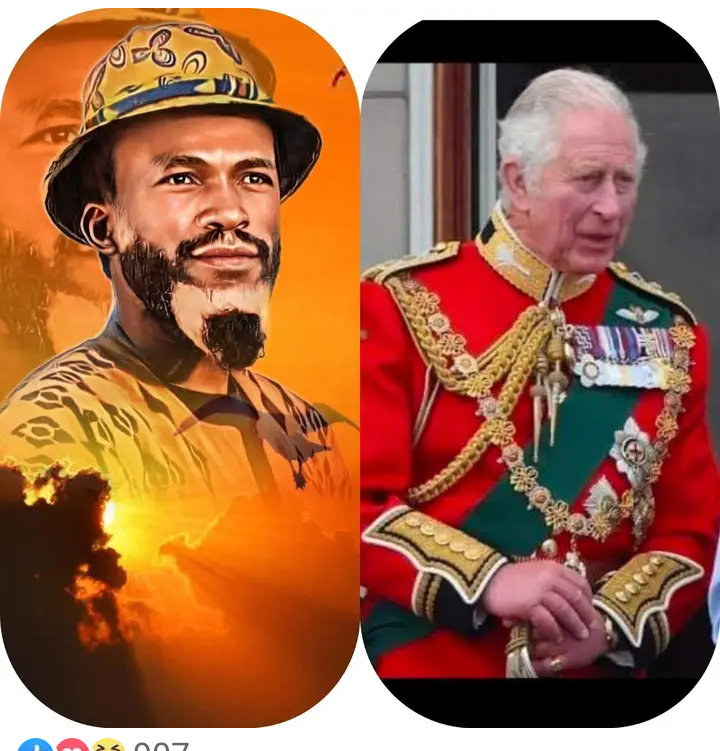 Queen Elizabeth died at 96 years and never said I am sorry, never restored or returned the stolen goods, and wealth across the world. Her track record of thuggery stretches from India, Carribean & Afrika. Her very city was built by slaves. The red carpet she likes walking on is the blood of our ancestors. Our kings did not die in Peace, they are not resting in peace, neither should she rest in peace until justice is done.

The damage the British Monarch caused is unparalleled as for the arrogance to chop off heads of kings and take them to your palace and use them as ritual cups or trophies, it borders on witchcraft. Until her death she refused to admit, apologize or send these skulls back for descent burial.

1. Relinquish your hold on lands on the common wealth (common poverty) you are the only one who enjoys the wealth.  Let go of the title deeds and let the local people utilise their land for food, industry and commerce.

2. Pay back the slaves what is due to them and those who want to return to their homes “Let my people go”, give them gold and safe passage

3. Fix what your mother failed to fix, seek peace with other kings, stop the arrogance of thinking your kingdom is the only one in the world, you are a king in your land not on all lands. Return the skulls of our kings, it’s your Royal duty to return Royal skulls which lay in your palace. There will be no rest until our ancestors are buried with dignity.

4. Come and take Cecil John Rhode’s body, your servant and remove him from our Royal shrine, while at it, take the name Victoria Falls back to queen Victoria, our fall is called Mosiyatunya.

5. Love your children and learn to be a good father. Forgive yourself for having your grandmother (Queen) run your household. Take responsibility, and be a man. Restore your son’s dignity and you will earn my respect. He married an Afrikan woman we now family as of the days of old…blackness is back. If you were man enough to make the children be man enough to bring them up.

6. Return the copyright and the profits of the Bible to their rightful owners, King James did not write that script, but plagiarised extracts from the book of the Dead and bible of Ethiopia. The crown has made billions from sales of this book, the least you can do is to return stolen IP. It also says “thou shall not steal”.

7. Travel around the world and make peace where your fathers and mother waged war. Use the few years you have to do this and you will die in peace.