The President of IMANI Africa, Mr Franklin Cudjoe, has reacted sadly to the unfortunate news of the death of Justine Avle, the wife of Citi FM and Citi TV General Manager.

According to the report Justine Avle died on 3 August 2022 after a short illness. Bernard Avle married Justine in 2011 and their 11-year-long marriage was blessed with four children.

Many Ghanaians have reacted to the sad demise of Justine Avle. Mr Franklin Cudjoe has joined Ghanaians who expressed their shock and sympathize with Mr Bernard Koku.

Mr Franklin Cudjoe said via a tweet “Oh my dear sister, Justine is gone? Just like that?? My brother, Bernard, my deepest sympathies. Hmm.”

Mr Avle is the host of Citi breakfast show on Citi FM and point-of-view show on City TV. The two got married in 2011. 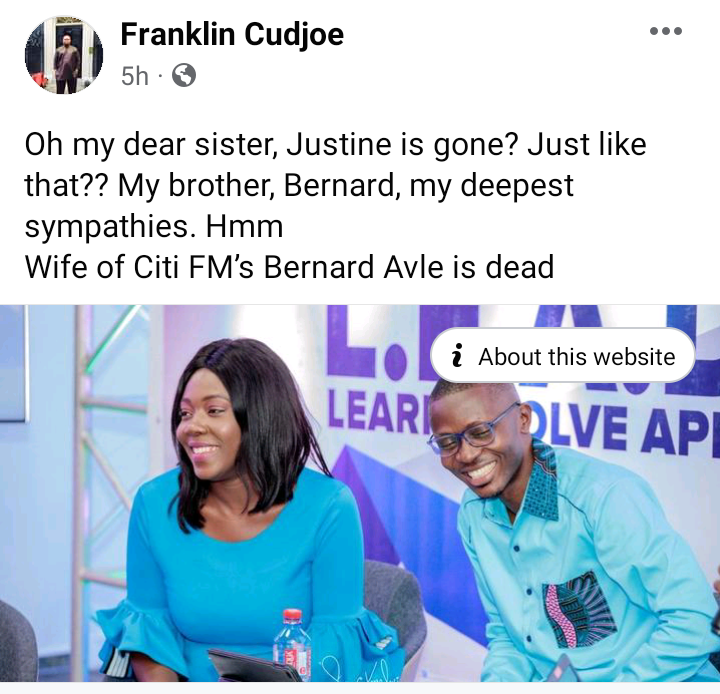 Content created and supplied by: Tawnews (via Opera
News )

Team Bremner and Rohwer the toast of Blue Valley

I Dealt With Two Foreigners This Week; What They Said Was Really Scary- Samson “Cries Out”

“As Long As They Didn’t Kill Anyone, Don’t Dismiss Police Men” – Shan George