It was an interesting discussion as Kwame Jantuah, a leading member of the CPP on political affairs and Kofi Kapito joined Berla Mundi on the set for today’s The Big issue on TV3’s New Day show. The three looked at Ghana’s high rising inflation rate and the new proposed increase in tariffs. According to Kwame Jantuah government instead of acting as a neutral government keeps on playing politics with a lot of issues.

Kwame Jantuah explained that government has lost her priorities and currently on auto pilot. He questioned why the country isn’t interested in growing local industries and rather spending monies to import goods. He noted that one of the basic needs of the country is sugar and yet the country is even struggling to have a sugar factory just because Akufo-Addo is failing to complete a Mahama project.

Kofi Kapito also bemoaned the increase in fuel prices and how contracts are now being given not based on competence but on partisan basis. Kofi averred that everything has now been turned political and this is eroding strides to develop the country.

As the panelists boxed on it was clear that many knew that Kofi Kapito had a clear history with the ruling NPP and they wondered why he was suddenly trying to appear like a neutral. In a series of texts, they sent during the Facebook stream of the programme they called on Kofi to stop being a hypocrite by assuming to be fighting for the ordinary Ghanaian. Check out some of the comments. 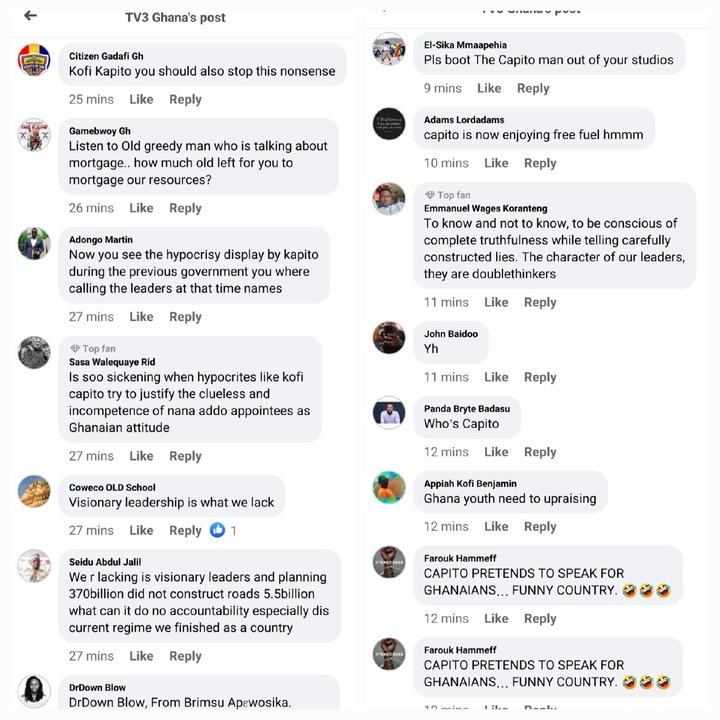