No matter how you look at it, Northern Ireland’s history with the Nations League has been nothing short of dismal.

In fact, it has been so poor Ian Baraclough’s men are only one of three teams yet to win a match in the competition. The other two? Iceland and, gulp, San Marino.

Northern Ireland have two more attempts to get their first win in September against Kosovo and Greece, but just why has the Nations League run been so poor?

How did we get here?

It became pretty clear, pretty quickly that Northern Ireland and the Nations League just weren’t meant to be.

It started full of hope and optimism under Michael O’Neill in September 2018, just months after Northern Ireland were a controversial penalty decision away from potentially reaching the World Cup.

However, O’Neill could not replicate the magic and Northern Ireland lost all four matches against Bosnia-Herzegovina and Austria.

Baraclough took over from Stoke City-bound O’Neill for the start of the new campaign and a promising draw in Romania was followed by a 5-1 drubbing by Norway and another defeat in Austria.

It wouldn’t get much better. Narrow defeats by Norway, where Stuart Dallas scored an own goal which sums up NI’s fortune in the competition, and Austria continued the run.

A final game draw at home to Romania did not spare Baraclough’s side relegation to League C. Ouch. 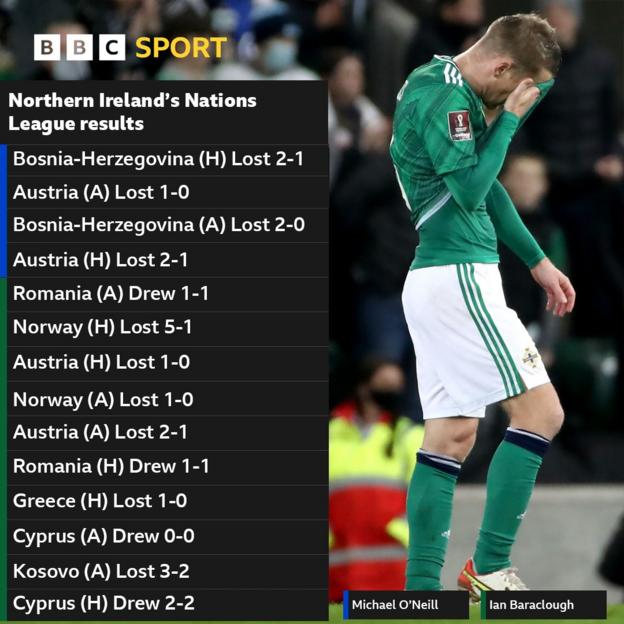 Four international games at the end of a hard and gruelling season are hardly anyone’s cup of tea.

Yet, the 2022-23 Nations League campaign kicked off with a quadruple-header and swiftly became even more grim than first feared.

Four games against teams ranked lower in the world seemed like the perfect opportunity to claim that elusive first win, but it did not turn out that way.

Greece came away from Windsor Park with all three points in the opener before a dreary draw in Cyprus, ranked 105th in the world.

The worst of the lot came in Kosovo when Northern Ireland lost 3-2 to a side ranked 107th in the world, and it could have been two embarrassing defeats on the bounce had it not been for a late Jonny Evans equaliser at home to Cyprus.

Why has it been so poor?

It’s hard to put a finger on exactly why Northern Ireland are just one of three teams yet to win a Nations League match but there are notable outliers for some of the games.

The heavy defeat by an Erling Haaland-inspired Norway took place at an empty and soulless Windsor Park without the Green and White Army, which has often dragged the team through games with their passion and noise. Just 600 were present for the Austria defeat.

The recent June quadruple-header came just weeks after the end of a long season, which could help explain the lacklustre displays. However, ultimately it was the same for every nation and Northern Ireland did not deserve to win any of the matches.

Baraclough has used the campaign to blood young players into the side, including Conor Bradley, Shea Charles and Paddy Lane. This is highlighted by the fact he has used 37 players in his 10 Nations League matches to date.

But, as a number of the Green and White Army have already highlighted with boos following the home Cyprus game, excuses will not be tolerated if the run continues.

So, here we are for what can only be described as must-win fixtures.

First up, it’s Kosovo at Windsor Park on Saturday and Northern Ireland will look to avenge that low-point in June in front of the Green and White Army.

The campaign ends with arguably the most difficult game away to Greece, and if the winless run goes on, a relegation-play off becomes a real possibility.

Heading into the final two games the other bottom sides in other Leagues are Lithuania, Belarus and Gibraltar. All winnable, of course, but the longer the wait goes on the larger the fear grows that another relegation is a possibility.

Can Northern Ireland end their Nations League hoodoo and escape the comparisons to San Marino, or will they end up playing them more regularly with another relegation? Only time will tell.