A political lecturer at the University of Ghana Professor Ransford Gyampo has insinuated that Former President John Agyekum Kufuor was able to reshuffle his finance Minister, Yaw Osafo Marfo to a different sector.

“Kufuor, the greatest President in Ghana’s 4th Republic had the courage to reshuffle OM from Finance to Education & later demoted him by creating a Senior Minister position for him. He did same to NADAA and DB. He virtually fired KAA!

The comments of Prof Gyampo comes in wake of many calls by Ghanaians for President Akufo-Addo to reshuffle his Ministers. Ghana is in economic crisis as it has moved to IMF for a bailout. Amidst that a lot have called for a reshuffle to see if things may go back to the way it used to be again. 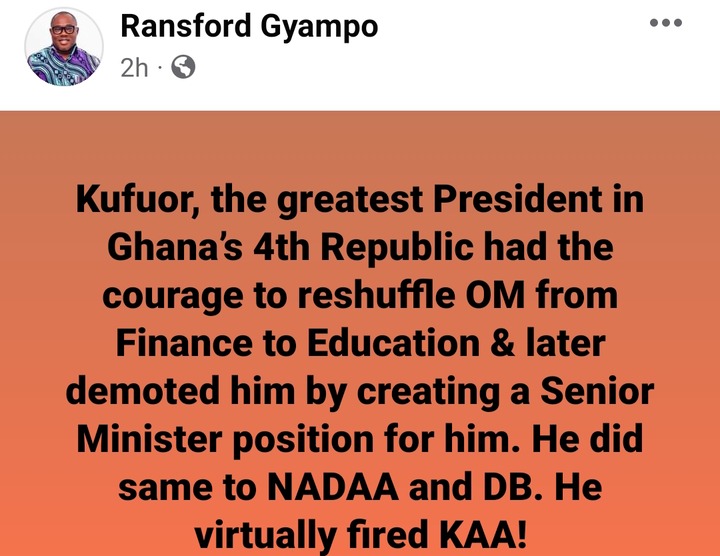 Some people questioned Prof Gyampo that how did he ranked Kufour as the greatest president on the fourth republic?

“What’s your metrics and assessment methodology for ranking Kuffour the best?” A user asked.

“Objections! Kuffour cannot be the greatest president in the Ghana’s 4th Republic. His dishonesty is beyond imagination. Re-denomination of Ghana cedis on 1st July 2007, and the sale of Ghana Telecom, cannot be forgotten.” A user said.

What is effect of reshuffle of ministers on productivity or performance of a government?Any literature on this will be helpful.

If A Woman Starts Developing Feelings For You, She Will Ask You These Questions