Kwame Asare Obeng popularly known as A Plus has commented that he will report some police officers who have allegedly planted marijuana (wee) into a taxi driver car and demanding GH 2,000 to their boss.

“Waa look at this,

I’ll go to the station tomorrow to report them to their boss! Ordinary citizens have suffered too much in the hands of those who are supposed to protect them. This must stop immediately!”

A Plus shared a screenshot shot of the story in which some Police Offficers are alleged trying to extort money from a taxi driver below; 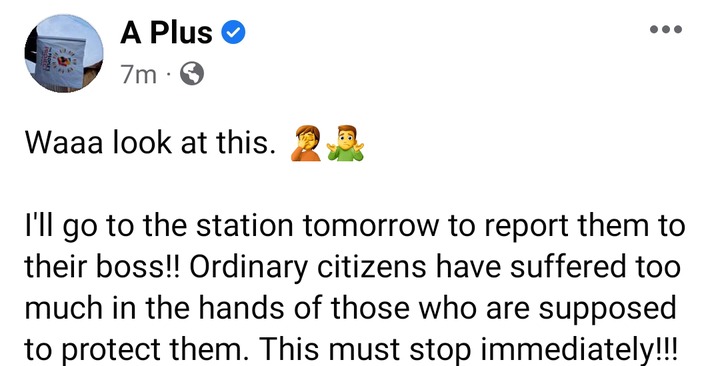 “Boss,same was done to my husband this dawn. I work with Ghana Ports and Harbours My husband lost his job and has been home all this while. Someone gave him a car to drive so he can support in a way,just this dawn,police men from the Ashaiman middle East police station.

They stopped him and made him stand aside and the Police man said he found wee under the passenger seat behind my husband. He explained he was a bolt driver, they held the car till he came all the way to klagon to take 500gh from a neighbour. They initially asked him for 2000gh.” She narrated.

A Plus believe that those who are to protect the citizens are making them suffer.

“This is bad. If some police,after being paid their monthly salary do this, then teachers are doing well papa. No classes fee, no exam fee, no nothing just salary. God bless the teachers.” a user said.

“When a police stops you and asked for a check up, just make sure first of all, all your doors are locked and the booth as well, come down and open any part they want to search for them by yourself, ones they asked to open and you do then you have put yourself up for a set up by the bad ones.” A user advised.

Eat These Foods More To Boost Your Immune System