HomeNewsI Will Expose You; I Have All The Documents Ready: Kevin Taylor Serves Serious Notice- Read Details
News

The recent circulating news that has sparked massive stir, debates, and arguments across all social media platforms was when the USA-based Ghanaian broadcast journalist finally came out to send another strong notice to the office of the Vice President, Dr. Mahmoud Bawumia over the rehabilitation project which was completed at the Sunyani Airport.

Speaking on the most anticipated “Loud Silence Media” show, the USA-based Ghanaian broadcast journalist, Kevin Taylor revealed that, he has enough evidence to expose Vice President, Dr. Mahmoud Bawumia’s brother, Ibrahim Bawumia for some illegal deals during the rehabilitation project at the Sunyani Airport alongside bloating of the cost involved in the project amongst others. 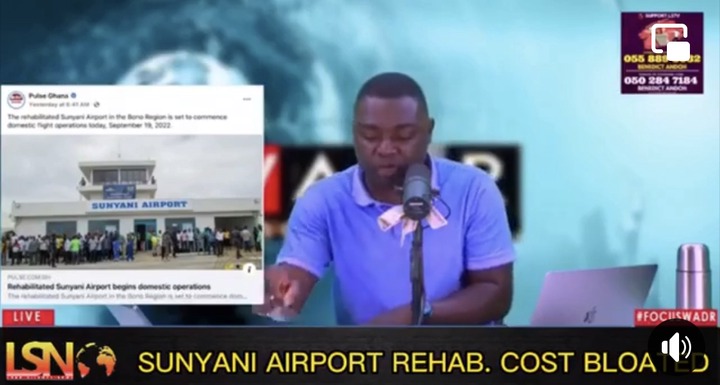 “This goes straight to Bawumia, I have got some few questions to ask him. The Sunyani Airport rehabilitation contract sum was inflated over a 100%. The contract was given to Dr. Mahmoud Bawumia’s brother and his partners. His name is Ibrahim Bawumia. So, if you know Ibrahim Bawumia, tell him that Kevin Taylor says he inflated the Sunyani Airport rehabilitation contract. There were some deals that happened which were illegal; I will expose you. I have all the documents ready”, Kevin Taylor emphatically revealed.

Do you think the USA-based Ghanaian broadcast journalist has the required documents to expose the Vice President, Dr. Bawumia’s brother over the rehabilitation of the Sunyani Airport even though most individuals claimed otherwise?

What are your thoughts after the USA-based Ghanaian broadcast journalist, Kevin Taylor sent another strong notice to the office of the Vice President, Dr. Mahmoud Bawumia over the Sunyani Airport rehabilitation contract that has caused massive reactions online even though most individuals claim otherwise?