Ghana champions Asante Kotoko has their eyes firmly fixed on Sunday’s titanic league game with their arch rivals Accra Hearts of Oak as they open the defence of their title.

The Porcupines, will host Hearts of Oak at the Baba Yara Stadium in Kumasi in a betPawa Premier League Matchday Three game they will look to win.

Asante Kotoko bowed out of the African Champions League competition last Sunday after losing to Burkinabe champions RC Kadiogo and, they will be eager to bounce back this weekend after leaving most of their fans heartbroken with that defeat.

“Firmly fixed for Sunday,” was a short message the club posted on their media channels on Thursday.

And in an attempt to get back the support of their fans after the disappointing performance last Sunday, the club has reduced rates for the game against the Phobians this weekend. 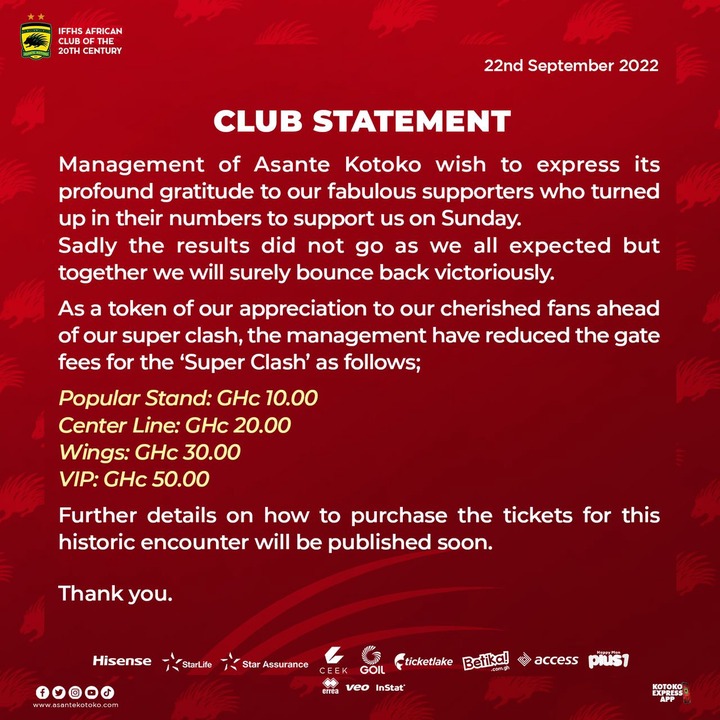 The kick-off time for this meeting, has been set at 3:00pm local time in the Garden City on Sunday with the duel, set to be shown live on television on the StarTimes Adepa TV Channel 247 worldwide.

Kotoko, will look to apiece their fans with a win to cushion them up for the reminder of the campaign.

Content created and supplied by: KONTOMIRE (via Opera
News )