HomeNewsArrest The Driver Immediately: Sad News As Over 12 ‘Innocent’ Passengers Die In A Fatal Accident
News

The recent circulating news that has undoubtedly caused massive reactions across all social media platforms aside from breaking the hearts of most Ghanaians was when over 12 innocent passengers met their untimely death in the central region.

According to recent reports cited by TV3 Network, the unfortunate incident occurred when passengers on board a bus traveling from Kumasi to Takoradi in the Western Region later ended in a head-on collision at Ayensudo in the Central region of Ghana.

Surprisingly, 14 out of 15 passengers died instantly when the bus they were traveling in collided head-on with a truck that was loaded with cement.

According to an eyewitness, the truck with registration number GM 2670-12 which was involved in overtaking other vehicles at a point on the highway engulfed in smoke due to a nearby bush burning hence causing the unexpected accident.

It was later revealed by the eyewitness that, the driver might have been blinded by the smoke and hence took to his heels after causing the heartbreaking accident.

However, the only survivor as a result of the gruesome accident is said to have been rushed to the Cape Coast Teaching Hospital for further emergency care considering her injuries among others. 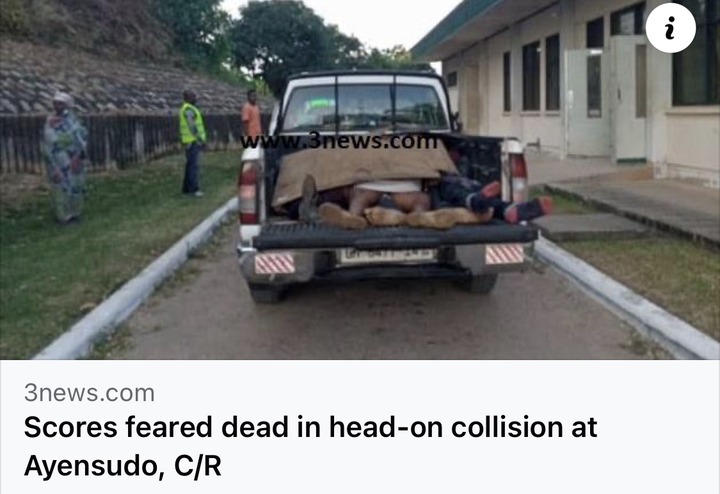 Do you think the unfortunate accident which killed 14 innocent passengers was a result of the unexpected smoke from the burning bush near the roadside as revealed by the eyewitness even though most individuals claimed otherwise?

Do you think that the driver who unexpectedly took to his heels after killing 14 innocent passengers must be made to face the law even though some Ghanaians agreed otherwise?

What are your thoughts after the 14 innocent passengers met their untimely death due to the driver’s careless driving and overtaking that has raised massive concerns online even though most individuals claim otherwise?

The Art of Living organization to hold event on peace, happiness